You are here: Home / Sourcery / Hubbard’s “Allied Scientists of the World” Scam 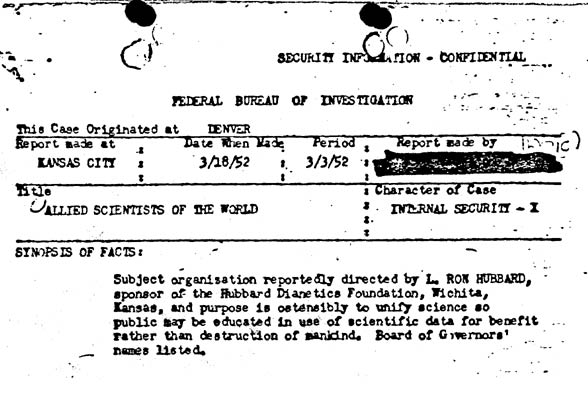 More information has surfaced recently about Hubbard’s “Allied Scientists of the World” scam, which he ran in 1951-52. 1, 2

Between December 1945 and January 1946, Robert A. Heinlein exchanged letters with Dr. Francis M. Pottenger concerning a “project” called “The Federation of Atomic Scientists” and later the “Federation of American Scientists.” Heinlein explained that he didn’t intend to be involved directly, that “Lt. Hubbard had intended to do the “organizational and publicity work” but instead he had to get a job and make some money, and regardless the organization work had since progressed without the help of either Hubbard or Heinlein. (Heinlein archives: CORR220-2) (Also see OCMB: Hubbard and Heinlein)

On 9 November 1951, Hubbard sent a handwritten letter from Wichita to the Heinleins at their home in Colorado Springs, Colorado. Hubbard said he was almost at the Heinleins’ front door the week before, but couldn’t stop. He added that “I’m up to some shenanigans near you” and said he would be in the area.

On 4 December 1951, Hubbard sent a telegram to Heinlein announcing that the “Allied Scientists of the World”3   was “revived and is back with half million.” Hubbard says that “Dianetics” will never be mentioned” in connection with ASW, then says,”its offices located 211 West Douglas, Wichita Kansas,” which was the known public address of Hubbard’s Dianetics Operation. Hubbard wrote in the telegram that ASW had a “communications office” at 941 East 17th Ave, Denver, CO. He said that the “goal is to unite scientists and give organization to United Nations for its charter. No other angles.” Hubbard said he “would be honored” to have Heinlein on its “Board of Governors.”

Hubbard sent “Bob & Ginny Heinlein” a letter the same day on “The Hubbard Dianetic Foundation, Inc.” letterhead, address 211 West Douglas Avenue, Wichita 2, Kansas, mentioned his wire “concerning the allied scientists of the world,” and hoped Heinlein would accept. Hubbard explained that when the organization “started out in 1945” it was “incapable of restraining its membership of following the conservative line necessary.” He added that he had been “pretty wild” himself in those days,” but now it has “every chance of success,” “enormous resources backing it” and “no danger or liability,” presumably to Heinlein, in associating with it.”

Heinlein responded by “nite letter” dated 5 December 1951, saying “Greatly appreciated honor but need fullest details.” Heinlein said that the world situation had “changed greatly in the last six years” and seemed to surmise that “purposes and program” of whatever “alliance” he and Hubbard had discussed six years earlier, “must have changed also.” (Heinlein archives: CORR 306-02)

I haven’t been able to determine if Hubbard provided Heinlein with further details. There is, however, in the Heinlein archives an article about Allied Scientists of the World clipped from the Denver Post of 27 January 1952, titled “Mystery Anti-A-Bomb Office Quits Denver.” On the archives copy, there’s a note above the title, in what looks could be Heinlein’s handwriting, saying simply “Hubbard.”

Federal investigators disclosed Saturday that a mysterious organization–with the announced purpose of enrolling scientists and protesting use of the atom bomb–suddenly closed its Denver office this month after a brief cloak-and-dagger existence.

The organization was known as Allied Scientists of the World; also the Alliance.

Its activities first came to the attention of investigating agencies in late November and early December, when protests suddenly started pouring in from scientists, engineers and architects in all parts of the United States.

The protesting scientists and technicians, many of them working on top secret government projects, said they had received identical letters from Denver–the “Communications Office, America” of the Alliance–in which they were complimented for scientific achievement and told they had been awarded fellowships in the organization.

They were asked to submit $25 for a year’s dues.

The letters were signed “Agnes Dobson,” who was identified as secretary of the Alliance’s board of regents. Investigators have not been able to find a trace of such a person.

Accompanying literature explained the purpose was to band scientists together to protest use of atomic energy–today’s major U.S. weapon–in any future war.

Also the organization announced it planned to compile and build an atomproof library of vital scientific information, and to take a hand in the government’s plans for civil defense. Solicited scientists were told the organization, once it got going full steam, would be turned over to the United Nations.

Postal authorities put a stop to mail solicitation of “dues.”

Other investigators–including representatives of the Better Business bureau and financial agencies–visited the office at 941 East Seventeenth avenue in Denver but found only office help who could give little information.

Probers kept checking all over the country, finally found the Alliance was […] [one or two lines of text cut off.]

of Wichita, Kan., a firm which trains laymen to practice what the foundation describes as a new science of mental health. The foundation is headed by L. Ron Hubbard, well-known science fiction writer.

But while they were pulling information out a shred at a time, investigators rechecking the Denver office on Jan. 21 found to their surprise that the Alliance had […] [one or two lines of text cut off.]