You are here: Home / Scientology / Promotional material / Promo: Target: 3000 local Scientologists studying on the Route to Knowledge by LRH’s Birthday! 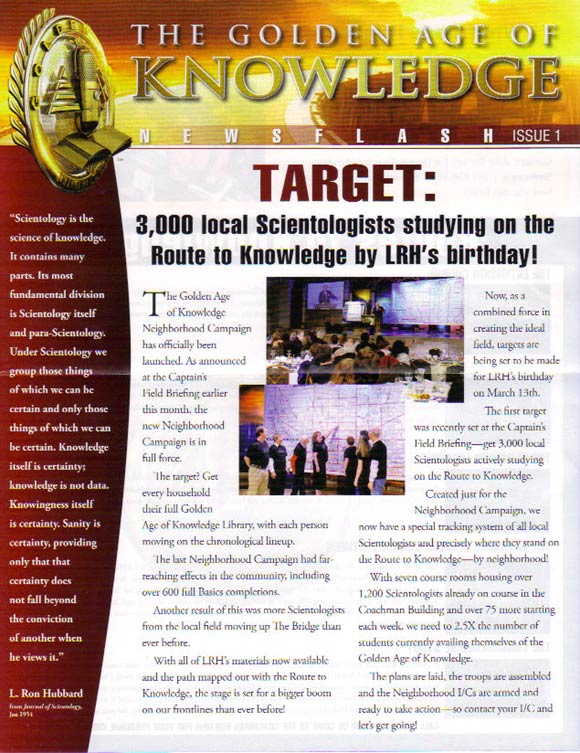 The target? Get every household their full Golden Age of Knowledge Library, with each person moving on the chronological lineup.

The last Neighborhood Campaign had far-reaching effects in the community, including over 600 full Basics completions.

Another result of this was more Scientologists from the local field moving up The Bridge than every before.

With all of LRH’s materials now available and the path mapped out with the Route to Knowledge, the stage is set for a bigger boom on our frontlines than ever before!

Now, as a combined force in creating the ideal field, targets are being set to be made for LRH’s birthday on March 13th.

The first target was recently set at the Captain’s Field Briefing–get 3,000 local Scientologists actively studying on the Route to Knowledge.

Created just for the Neighborhood Campaign, we now have a special tracking system of all local Scientologists and precisely where they stand on the Route to Knowledge–by neighborhood!

With seven course rooms housing over 1,200 Scientologists already on course in the Coachman Building and over 75 more starting each week, we need to 2.5X the number of students currently availing themselves of the Golden Age of Knowledge.

The plans are laid, the troops are assembled and the Neighborhood I/Cs are armed and ready to take action–so contact your I/C and let’s get going!1