You are here: Home / Literature / Article: Setting the stage for 2007 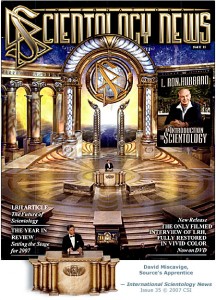 International Scientology News Issue 35 reported on Scientology’s New Year Event 2007 in an article entitled Setting the Stage for 2007. Cult head David Miscavige’s personal stage is his army or navy of Scientologists, agents, PIs and lawyers around the world. The stage Scientologists see is the one at the Shrine Auditorium, from which Source’s Apprentice speaks.

In this excerpt from the beginning of the article, Miscavige provides a glimpse of the role he’s using Tom Cruise and Katie Holmes for in his planetary play, or game, or war. Tom-Kat’s reality show “Wedding of the Century,” DM says, brought “every major media machine on earth” to give introductory lectures on cult Source L. Ron Hubbard’s “magic triangle” ARC, Affinity, Reality and Communication.1

The ARC triangle is a “formula” in Hubbard’s tech for manipulating people’s human emotions to get them to align with and forward Scientology’s purposes. ARC is also used as a concept to give Scientologists a sense of superiority over the wogs and wog world that Scientology and Scientologists seek to control, and consequently instill in Scientologists a “moral” right or even “duty” to control anyone and anything. 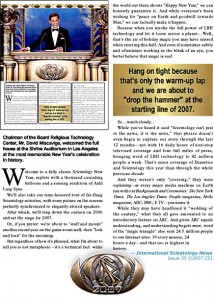 DM cannot help revelling in his “beingness” as bully, thug or Ecclesiopath: “we’re about to “stuff and mount” another record year on the game-room wall, then “lock and load” for the incoming.” He also shows off his new elevated magus stature and Scientology’s new magical direction and operations under his command: “when you invoke the full power of LRH technology and let it loose across a planet… even if sometimes subtle and oftentimes working in the blink of an eye, you better believe that magic is real. So …watch closely…”

The theme for the whole magazine is Scientology as magic and DM as the magician. Perhaps he’s had it with still being seen as Old Sorcerer Ron’s little apprentice.

Chairman of the Board Religious Technology Center, Mr. David Miscavige, welcomed the full house at the Shrine Auditorium in Los Angeles at the most memorable New Year’s celebration in history.

Welcome to a fully classic Scientology New Year, replete with a thousand cascading balloons and a rousing rendition of Auld Lang Syne.

We’ll also take our time-honored tour of far-flung Scientology activities, with every picture on the screens perfectly synchronized to elegantly attired speakers. After which, we’ll ring down the curtain on 2006 and set the stage for 2007.

Or, if you prefer: we’re about to “stuff and mount” another record year on the game-room wall, then “lock and load” for the incoming.

But regardless of how it’s phrased, what I’m about to tell you is not metaphoric–it’s a technical fact: while the world out there shouts “Happy New Year,” we can honestly guarantee it. And while everyone’s been wishing for “peace on Earth and goodwill towards Man,” we can factually make it happen.

Because when you invoke the full power of LRH technology and let it loose across a planet… Well, that’s the air of holiday magic you may have sensed when entering this hall. And even if sometimes subtle and oftentimes working in the blink of an eye, you better believe that magic is real. So …watch closely…

While you’ve heard it said “Scientology isn’t just in the news, it is the news,” that phrase doesn’t even begin to capture our story through the last 12 months–not with 16 daily hours of non-stop televised coverage and four full miles of press, bringing word of LRH technology to 42 million people a week. That’s more coverage of Dianetics and Scientology this year than through the whole previous decade.

And they weren’t only “covering,” they were explaining–as every major media machine on Earth ran with our Backgrounds and Ceremonies: The New York Times, The Los Angeles Times, People magazine, Hello magazine, ABC, BBC, E TV–you name it. While they may have headlined it “wedding of the century,” what they all gave amounted to an introductory lecture on ARC. And given ARC equals understanding, and understanding begets more, word of the “magic triangle” also sent 24.5 million people to our Internet sites: 30 every minute, 24 hours a day–and that too is highest in history.