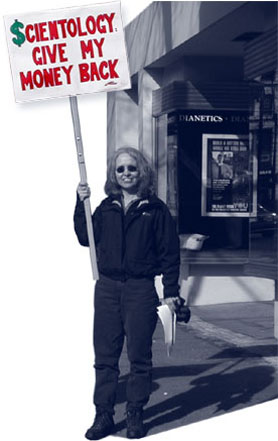 On January 1, 1975 I was lured into Scientology in Vancouver with a ticket handed to me on the street offering a free IQ and Personality Test and conveying the message that here was where to go to have the career of my choice. I wanted to be a writer. The Scientologists soon changed my career goals to obtaining the promises spelled out by the system’s creator and then director L. Ron Hubbard in his many books and in a mountain of “technical” and promotional literature. I took the Scientology tests, bought and read a bunch of books, did their courses, submitted to their interrogations, direction and domination, spent twenty-four years of my life, worked years on staff for slave wages, and paid over $60,000 to Scientology to get the results Hubbard promised.

The man making these promises for his “technology” said about himself, as did all the Scientologists throughout my years inside, that he was a scientist, indeed a nuclear physicist, and civil engineer, who had been crippled and blinded in World War II and cured himself with “auditing,” his mental science that Scientology would teach me. My IQ would go up a point per hour of auditing, I would become “Clear” and “OT,” I would have perfect recall, I would never get colds, my eyesight would be perfect, I would be able beyond levels of ability before Scientology only dreamed of. These results, Hubbard and Scientology said, were invariable, permanent, arrived at by grueling scientific research, and guaranteed with a further promise of the refund of fees paid if the person is dissatisfied with the “service.” Scientology, Hubbard wrote, is the most ethical organization on earth. I went “Clear”, and clear up to OT 5, a very high “state” or “level,” and I became a Class 9 Auditor, a very high level of Scientology expertise.

Once the Scientologists had me hooked with their promises of wonderful and guaranteed results, they kept me slaving and controlled with a sophisticated brainwash and fear system that overwhelms organization members and completely controls their allegiance. Hubbard and Scientology label anyone who disrupts or threatens to disrupt a Scientologist’s allegiance to the cult a “Suppressive Person,” or “SP.” Hubbard and Scientology teach that SPs are the most evil 2 ½ percent of the planetary population, that SPs are the cause of all illness and all bad conditions, that SPs are the truly insane, and that only Scientology has the “tech” to spot SPs, to stop SPs, and to save the world from being destroyed by the SPs. I got married in Scientology and raised my daughter Ann as a Scientologist, believing as every Scientologist believes that this cult with its “technology” is mankind’s only hope, and only the SPs stand in the way.

“Suppressive Persons” are so hated in Scientology as the source of the world’s problems that Scientologists believe that SPs should have no human rights. In one policy directive Hubbard wrote:

ENEMY – SP Order. Fair game. May be deprived of property or injured by any means by any Scientologist without any discipline of the Scientologist. May be tricked, sued or lied to or destroyed. (HCOPL Penalties for Lower Conditions)

In another Scientology policy, which, to sound “religious” the cultists call “scripture,” Hubbard ordered that SPs be “obliterated .”

By 2000, through a series of blessed coincidences, which included abuse that I could no longer ignore, and the discovery of certain materials on the Internet that debunked lies about Hubbard and Scientology, which I also could not ignore, I was able to start getting out of the cult, physically and mentally. The claims and promises that I had been fed and swallowed all those years in the cult, and which had been cynically used to control me, to rip me off and to keep me impoverished, I began to see as utter lies. This is a process of deprogramming myself from the Scientology brainwash that continues to this day.

With great disappointment and pain and a terrible anguish of betrayal I was able to confront the truth that I had been defrauded out of my twenty-four years of dedication to making Scientology work, and defrauded out of every cent I had paid for its “services.” I had to confront the embarrassing truths that my IQ had not gone up even one point after more than a thousand hours of auditing, that I wasn’t “Clear” and there is no such state of “Clear” in Scientology. I have had to face the facts that Scientology is a supremely unethical, even criminal organization, that its leaders had for their own malevolent motives systematically prevented me from finding out the truth, and that it is Hubbard’s Suppressive Person doctrine that is evil, not the SPs the doctrine creates and targets.

When I wrote a short essay criticizing some of Scientology’s antisocial activities and “technology,” the cult’s leaders ordered Ann to “disconnect” from me. She has not responded to my letters and other communications in over three years. Scientology claims they are pro-family and have the “tech” to keep families together. In truth this cult destroys loving relationships, and uses its “tech” to split families apart.

In November 2001 I made a demand on Scientology’s new leader David Miscavige (Hubbard died in 1986) for refund of the more than $60,000 in fees I had paid for his cult’s “services,” the results of which had been completely dissatisfying. I wrote to Miscavige because he is now personally legally responsible for Scientology’s lies, fraud, “service,” finances, doctrines and refunds. Organizationally Scientology is a dictatorship, and Miscavige is the dictator. Miscavige’s response to my reasonable request was to publicly declare me to be a Suppressive Person, signaling that I was to be injured by any means, tricked, sued and obliterated. In violation of the cult’s own refund policies, Miscavige has ordered that his cultists are not to refund my money they ripped off.

Along with my fiancé Gerry Armstrong , who is also a long time victim and target of Scientology’s violent policies and practices, I have just built a web site to tell my story, expose the cult’s fraud and criminality, and support my effort to obtain a refund.

Gerry tells his amazing story of more than twenty-two years of persecution as an SP on www.gerryarmstrong.org. We also created a site www.suppressiveperson.org to expose the Suppressive Person doctrine, and support its many victims. Another very valuable resource for understanding Scientology and its dangers is www.xenu.net