FORREST ACKERMAN – Hubbard’s literary agent:
“He said that he had died on the operating table, and that he rose in spirit form, and he looked at the body that he had previously inhabited and he shrugged the shoulders he didn’t have any more and he thought ‘well then, where do we go from here?’ Off in the distance he saw a great ornate gate, and he wafted over to it, and the gate, as they do in supernatural films, just opened without any human assistance. He floated through and on the other side he saw an intellectual smorgasbord of everything that had ever puzzled the mind of man – you know, how did it all begin, where do we go from here, are there past lives, and like a sponge he was just absorbing all this esoteric information and all of a sudden there was a kind of swishing in the air and he heard a voice, ‘no, not yet, he’s not ready’ and like a long umbilical cord he felt himself being pulled back, back, back and he lay down in his body and he opened his eyes, and he said to the nurse, ‘I was dead, wasn’t I?’. Then he bounded off the operating table – I don’t know how you die, then you bound off an operating table. He got two reams of paper, and a gallon of scalding black coffee, and at the end of two days he had a manuscript called ‘Excalibur’ or ‘The Dark Sword’. And he told me that whoever read it either went insane or committed suicide. And he said that the last time he had shown it to a publisher in New York, he walked into the office to find out what the reaction was, the publisher called for the reader, the reader came in with the manuscript, threw it on the table and threw himself out of the skyscraper window.”

But was Hubbard’s extraordinary story true? Excalibur became the stuff of mystery. Hubbard told friends it was too dangerous to publish. But forty years later, a treasure trove from Hubbard’s early journals and manuscripts, believed to have been long lost, was discovered by his staff. 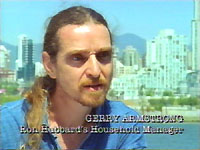 GERRY ARMSTRONG – Hubbard’s household manager:
“There were two and a half versions of Excalibur. I read them and I didn’t go mad and didn’t die. They also include the information within related writings, that these came out of a nitrous oxide incident. Hubbard had a couple of teeth extracted, and it was while under the effect of nitrous oxide that he came up with Excalibur.”

Hubbard’s ‘death’ was in fact an hallucination under the effects of anaesthetic. So what was the intellectual dish he’d fed on?

GERRY ARMSTRONG:
“It was not anything particularly revolutionary. The key to Excalibur was this great realisation, by Hubbard, of ‘Survive’ as being the one command that all existence, and all life and all people, have. That became the basis for a lot of Dianetics and a lot of Scientology.”

This idea had a profound impact on Hubbard. In a letter to Polly he wrote ‘I have high hopes of smashing my name into history so violently that it will take a legendary form.’

The Second World War brought a new dimension to the Hubbard legend. He said that while serving in the U.S. Navy he had been blinded, but that inspired by the insights he had first glimpsed when he died on the operating table he had dramatically been able to cure himself. 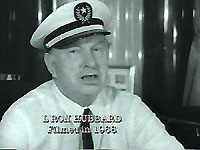 HUBBARD IN 1968:
“By 1948 through my own processing, and use of the principles I had isolated up to that time, was able to pass a 100% combat physical, which was very mysterious to the government, how had I suddenly become completely physically well, from being blind and lame.”

It was an odd story, because Hubbard’s war record shows his recurring problem was a stomach ulcer. There are mentions of conjunctivitis, but none of blindness. Indeed, none of his medical reports, before, during, or after the war, contain any suggestion of blindness, only shortsightedness and astigmatism.

After the war, Hubbard went to Hollywood. As a successful science fiction author he was a welcome visitor to the Los Angeles Science Fantasy Association. Its members recalled that there was one power over the mind he undoubtedly did possess – hypnotism.

FORREST ACKERMAN:
“Ron Hubbard came to our club and he hypnotised all of the members except me. I wanted to remain in present time and watch what was going on. I remember it was fascinating, he told one boy he had a little kangaroo in the palms of his hands, and the boy was going all around the room showing everyone this little kangaroo that was hopping around.”

In writings and conversations, Hubbard began to speak of his new science of the mind. As Scientology’s literature would later depict, Hubbard claimed that in addition to himself, he cured eleven other war veterans and restored sanity to forty mental patients. […]