Author: Hubbard, L. R.
Document date: 1968, 27 September
Document title: Standard Tech Defined
Document type: lecture transcript
Event: Class VIII Course
Location: TSMY Apollo
Document ID: 6809C27
Description: Hubbard announces that they (Scientologists) cracked the case of someone who was giving them trouble that day; claims he is a very good swami and that he can read people's minds; discusses the "swindle" of Freud and Breuer; says there are ancient methods of making people remember painful memories; likens his technology as a main highway of truth and admonishes his students to keep on the main road; denies any questions about Scientology, that the task is just to find out what the principles are and to do the series of actions he sets forth. 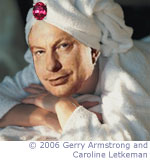 I don’t do these folders from crystal balls, boy. I do these just, these folders against the most concise series of data you ever heard of. Srrrrrp-boom! We cracked a case today down the middle. Down the middle, cross-wise and diagonally. It was just about, he’d given us a bad time. We keep cracking ’em. Knowing the data. Knowing the exact, basic rules and laws.

Now there’s something funny about all this. I know a lot of other subjects in which such data occurs. I can give you the datum of Freudian analysis. I’m a very good swami. I can read minds so as to tear your skull off. Good at it. Don’t ever do these things. Still know the data in connection with it. Why? Then out of this tremendous body of information are we stressing just these data? I’ve got us the widest possible selection. It’s the evaluation of importance, knowing which point is valuable and what is trash. It is knowing where the main line lies and where it doesn’t.

I wouldn’t give you spit for any datum in Freudian analysis. I wouldn’t give you dog spit for it. In fact Freud and Breuer probably should have been stood up against the nearest brick wall and shot unpleasantly, with dull bullets. You’ve always heard me be polite on that subject. I’m taking down my hair. I’m talking to a Class VIII student. What a lot of crap. You know who they really were? They were some guys who had found out how you could take the work of Charcot and Mesmer and persuade people to do things against their will under pain-drug hypnotism. And there isn’t an analyst on the planet who ever does anything else in the… It’s a method of shaking people down and bending their will.

Breuer and Freud, in 1891, were agents of Kaiser Wilhelm Hogensoloven. And they were dedicated to making politically-minded changes for him. A bunch of crap. A complete swindle. Just a hypnotist. So he invents the libido-dibido theory, and he goes poogly-poods and ids, and Greek mythology, and bah!

There’re certain principles involved in any savage and primitive think that you can use. Certain principles involved. There’s certain magical principles. There’s opening up somebody’s memory, making him, forcing him or persuading him to remember something painful, and so forth. These are known to every medicine man, every swami there is. How is it they knew it and never used it, huh? Right now, right now the beautiful technology, heh, of these characters is turned against Scientology, because the politicians you hear crying out against them have wives who have been violated by psychoanalysis. They are under the influence.

There are thousands of zones where data could lie. There’re billions of zones where, that you could consider truth. There’s a whole universe out here full of crap and bucks And I show you one little, narrow line that goes straight through it, like a shock, and a few gates, which if you open them exactly correctly, somebody goes out like he is on a rocket ride.

So if you ever mention to me again a question about something over in left field I’ll have you spanked. This is a lousiest thing – what the hell is anybody doing wandering around over here in left field? Here’s the main road. Let’s get on it, let’s find out what the principles on it are. I didn’t mean to curse you that mildly. Here’s the main highway. Now knock off the mucking about and get on it. There aren’t any questions about it, it just is. And it’s a certain series of actions that you do.